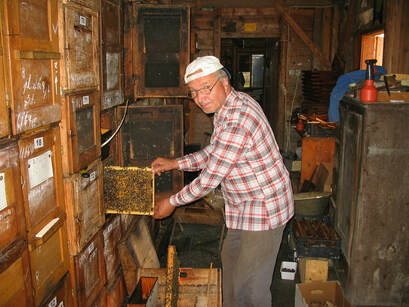 ​Selection work was one of the foundations of our work from the beginning. In 1967, queens of the carniolan honey bee were tested in Germany and Austria. Samples from Austria, several other countries and Bukovšek's samples from Slovenia were tested. Both testings showed that Bukovšek's and Austrian queens were comparable, while other breeds were significantly weaker. Because of good results, Alojz Bukovšek Jr. was invited to provide training to institutes of apiculture in Neustadt and in Mayen, Germany. Janko and Štefan Bukovšek, the third generation of bee-keepers, continue to breed queens today. 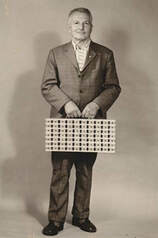 In 1931, then 15-year old Alojz Bukovšek Sr. began with bee-keeping. He built a bee-house for 27 beehives which is still used today. In 1934, he additionally increased the bee-house by another 45 beehives.
That year he also built the first 40 mating hives and began breeding queens in the spring for sale. Later he increased breeding and sold queens to Egypt through Jan Strgar together with bee colonies. The last queens departed each year in September. Sales to Egypt and other English colonies went well until the beginning of World War 2.
Before World War 2, our queens had been reaching British colonies through Mr. Strgar. The next milestone was selling queens to China and Argentina. In all periods, we have been selling queens to European countries, which is still our largest market. We are especially proud of queens bought from us by brother Adam Kehrle. He needed them to breed the buckfast bee.

ALL OUR QUEENS ARE RANDOMLY
MATED AND MARKED.